The Shoestring Strip: Los Angeles Goes Out on a Limb

Have you ever wondered why the city of LA looks the way that it does? With that bulbous north west growth atop a long skinny stick, it’s always reminded me of a droopy lollypop or perhaps a lopsided barbell. Over the years, the city that began in 1781 as a perfect square clearly morphed into something that historian J. M. Guinn called a “fright, a thing of utility perhaps, but not of beauty.”[1]

Whether beautiful or functional, the contemporary outline of LA is the result of at least 200 annexations and more than a few “detachments”.[2] Through a systematic plan of “progressive accretion,” the city absorbed many of the communities that surrounded it.[3] First, the neighborhoods of Highland Park and Garvanza were sucked in. Then large squares of county land on the west and south were added, along with the neighborhood around the University of Southern California. In 1906, city leaders proposed the most audacious annexation yet, a long strip less than a mile wide and 16 miles long that would enable LA to become a “Harbor City.”

The story about why LA made a break for the sea is fairly well known.[5] At the time, Los Angeles was in a race with Long Beach (and other interests) for control of the harbor. The strip’s primary purpose was to enable the city of Los Angeles to touch San Pedro and Wilmington because, according to state law, only land that was contiguous could be annexed.[6] A committee from the Chamber of Commerce recommended the route which they described as “a half-mile strip running thence between Vermont Avenue and Figueroa Street, to just beyond Gardena; thence across Vermont Avenue and proceeding one half-mile wide to and along the eastern boundary of Wilmington, and touching the northern boundary of San Pedro.”[7]  The strip had to be narrow so as not to impinge on land owned by the railroads.[8]

Annexation of the strip was a hurried affair. Papers authorizing it were filed with the California Secretary of State in August and the vote to confirm was held in November. In the intervening months, Long Beach had proposed its own consolidation plan that would have made it impossible for Los Angeles to reach San Pedro. According to the LA Consolidation Commission a vote for annexation was needed before the Long Beach “obstructionists could butt-in and make trouble.”[9] Under intense pressure, LA’s city leaders mounted an aggressive campaign to convince voters in the city and county of the necessity of the strip. 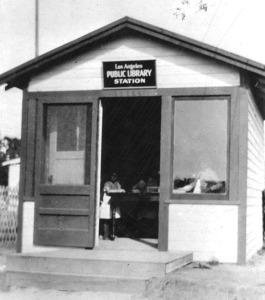 On election day, annexation was overwhelmingly supported in the city of Los Angeles, but won by only 10 votes in the county areas to be absorbed.[10] The campaign had generally been going smoothly, but just days before the election, the owners of Ascot Park Racetrack at Slauson and Central found themselves at odds with the proposed changes.[11] The track, and the betting that went on there, were legal while part of Los Angeles County. However, gambling was not permitted within the city of LA and so the racetrack would have to close.

According to the Los Angeles Times (not exactly a neutral source on the subject), supporters of Ascot Park called upon “the pikers and dopesters and the chambermaids of the racing stables” to defeat annexation.  A real estate office at Slauson and Wesley that served as the day’s polling place was surrounded by forces for and against annexation. Vote totals were apparently “neck and neck” throughout the day.  Given how careful the crafters of the strip had been to avoid the railways, it is kind of surprising that they had included Ascot Park at all. After the polls were closed, promoters of annexation “shuddered” at the “close leeway by which they had won.”[12]

Many of the strip’s small farm owners had wanted to join LA, however the transition to city status was not an easy one. Families, who had once been on the outskirts, now found themselves citizens of urban LA. There were new laws and new ways of doing business and the city services that had been promised were slow to arrive (figure 2). Initially, only the manager of the city’s animal services department seemed eager to make an appearance. In the winter of 1907, residents of the strip reported that the city’s “pound master” had been poaching their animals. The “stray” dogs, cows and other livestock that previously had been permitted to wander freely along country roads, were transported to the pound in downtown LA where, for a fee, the animal was released to its owners.[13]

Dotted with oil derricks, the shoestring strip remained largely rural until WWII, when many of the farms were converted to industrial uses (figures 3 and 4). 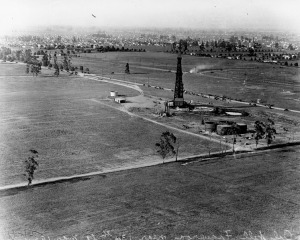 ← Sycamore Grove Park: A Garden for the Masses
Mother’s Day Walk with a Side of Women’s History →