The sewage seeping through the walls was absolutely the last straw. With a leaking roof, peeling plaster and weak gas lighting, the City Health Department Building at Spring and Temple Streets was no longer functional. The building had been described as “unhealthy” as early as 1939. However it wasn’t until September 3, 1953 when the “pungent” overflow of sewage splashed six inches deep on the first, second and third floors, that the city finally moved out.[1]

Despite its obvious importance to local residents, the facilities of the city health department had been wholly inadequate for most of its history. The department’s first office was in the “garret” of the old city hall tower on Broadway. The lab tested the freshness of milk, meat for harmful germs and the city’s water supply for bacteria. However if the department needed hot water (which they often did), staff members had to run down several flights of stairs to the basement to get it. In 1901, health department leaders had suggested adding a building to the City Hall yard. The new office would have included a state of the art laboratory and a room where physicians who had been exposed to infectious disease could be disinfected before returning to their patients. The city’s excessively economical finance committee was not convinced and the plans were never realized.[2]

In the early 1920s, the health department moved briefly into to the Bullard Building at 156 Spring Street. But when that building was razed in 1925 to make way for Los Angeles’ new city hall, the department moved “temporarily” into the International Savings and Exchange building next door. They stayed for 27 years.[3]

The International Building in 1910. This view and others are available on the Water and Power Associates website

Permanent and proper health facilities were delayed due to a clash of ideas about the future of the department. Some members of the city council wanted a brand new city-owned building dedicated exclusively to health services, others pushed for a consolidation with the county. These two forces were equally strong politically, which left the department in limbo.

A merger between the city and county health departments had been discussed in 1916.[4] The issue was raised again in 1947, in 1958 and in 1962. Each time, consolidation was rejected. It was argued that the city needed its own department because taxpayers would not receive the adequate service from the county. Some council members were also concerned about having to lay off hundreds of staff, while others disliked the idea of an impersonal “metropolitan government.”[5] LA city councilman Gilbert Lindsay specifically fought against consolidation, suggesting that this weakened the city’s “direct control” of health programs. Mayor Yorty was for the merger.[6] While the two sides argued, the city council refused to appropriate money for repairs to the current facilities in the International building.[7]

Aerial view from 1947 showing the International Building between Los Angeles City Hall and the Federal Court House. Image from the Water and Power Associates website.

After the sewage incident, a new health department building was finally authorized for a lot in the civic center on First Street between Main and Los Angeles Street. The building opened in 1954 and the International building was demolished the subsequent year.[8]

Despite the construction of this new space, the push to merge with the county continued. Consolidation supporters finally persuaded their colleagues and the two departments became one in July 1964. The lack of appropriate space emerged again as an issue of concern. For many years, the County Health Department had leased offices at 241 North Figueroa Street but preferred to take control of the 10-year old city facilities on Main and Los Angeles Street. The city already had planned other uses for the building.[9] In 1965, the city gave the county funding to purchase the building on Figueroa, along with the adjacent parking lot. The combined site would become the central administrative health headquarters. [10]

County administrators selected Arthur Froehlich & Associates as the project architects. Froehlich seems a curious choice, since he was more famous for designing horse racing tracks and athletic facilities (including the recently demolished Hollywood Park in Inglewood – a whole other story). However, plans were submitted to the county supervisors in 1968 and the administrative headquarters were completed in 1970. [11] With its strict white formalism, the building is evocative of the Music Center and the Dorothy Chandler Pavilion a couple of blocks away. It sits on a raised plinth and is surrounded by a Japanese styled landscape that acts as a moat separating the building from the street. The building’s bottom floors are clad in polished black marble while the remainder of the exterior of the building is covered by precast concrete panels.

Whether from oozing sewage or the sludge that accompanies clashing political agendas, for most of the 20th century, the central facilities of the city and county health departments have been less than ideal. Today, the system is a broad decentralized collection of hospitals, clinics and community centers that continues to be challenged by space and resource issues. However there are no plans to move from the Figueroa site. 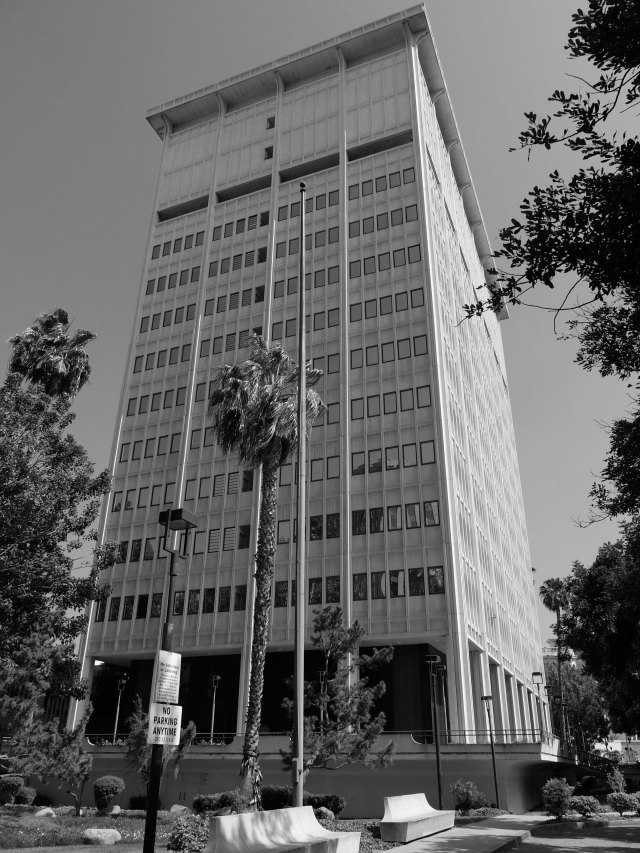 The Health Administration Building in 2016. Photo by author. 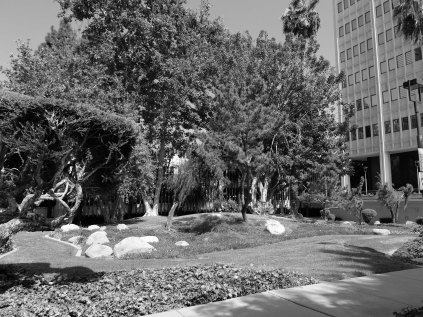 The building is surrounded by a Japanese-style garden that separates it from the street. Photo by author.

The building is situated on a raised plinth above a small green space. Photo by author. 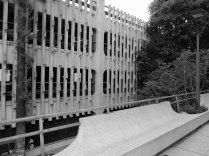