Veterans Memorial Square and the Monument to Peace That Wasn’t

Los Angeles City Councilman Gilbert Lindsey roared at the demonstrators who filled the council chamber, “I don’t care what you do, just shut up!”

Lindsey’s anger had been aroused on behalf of members of the American Legion, the Veterans of Foreign Wars and the other “real people of America,” who wanted to erect a veterans memorial in Highland Park.[i] The memorial had been described as a monument to peace. However, if the planning phase was any indication, peace would not be its lasting legacy.

Figure 1: the Veterans Memorial Foundation proposed erecting the wing of a B-52 bomber on the corner of Figueroa and York Boulevards

The original idea was floated in 1971, when a group called the Veterans Memorial Foundation suggested placing a small obelisk at the intersection of Figueroa and York Boulevards. The plan received the enthusiastic support of Lindsey’s colleague Councilman Arthur Snyder who represented the district. In its earliest incarnation, the monument appeared to have few detractors. However, things took a turn when, instead of an obelisk, the group proposed to use the wing of a B-52 bomber (figure 1).

The Veterans Memorial Foundation had secured the wing as a donation from the United States Air Force and the Boeing Corporation offered to move, patch and mount it. With a 30 foot base and a length of more than 80 feet, the wing would be the tallest structure in Highland Park.[ii] An idea that generated a vitriolic and prolonged debate.

Over the next few months, the local Kiwanis Club, American Legion and Chamber of Commerce came out in support of the wing, suggesting that it would “enhance the value of that section of our city as a tourist attraction.” They envisioned the wing as an “identifying landmark” and a “boon” for the area’s business.[iii] Supporters, such as George Bean, president of the Veterans Memorial Foundation spoke about the need for a monument dedicated to all who had died for their country. George Wadney, the former president of the Highland Park American Legion post, reminded those opposed that the B-52 enabled them to “sleep in clean white beds instead of foxholes or bomb shelters”.[iv]

Supporters spoke in general terms about patriotism and honor. However, those who argued against the monument brought the specifics of war to the fore. Among the letters on file at the Los Angeles City Archives and Records Center, individuals opposed to the project invariably began by stating their support for veterans. The primary point of their attack was not the monument, but the use of the B-52 wing as a symbol.[v]

Randy Koppang urged the council to oppose the “image of death in the form of a bomber wing.” Hundreds of individuals signed a letter from the Highland Park Community Democratic Club suggesting that the B-52, “more than any other war machine is a symbol of man’s indiscriminate destruction of his fellow man.” Members of the Women’s International League for Peace and Freedom were “appalled” and argued that the wing is “a blasphemy toward peace”. Irmgard Burling wrote a letter in which she alluded to her personal experiences:

I hope Councilman Snyder and others who have never been civilian victims of bombings can convince themselves that the wing of a B-52 could be a symbol of peace and a source of inspiration. However, to the thousands of people in this city who spent the years of World War II in Europe… under the constant threat of bombs crashing all about them taking the lives of their loved ones and destroying their homes – to all of those people who were lucky enough to survive, no bomber wing can ever represent peace or honor…

Mrs. Peggy Valadez stated that she had contributed money to the first proposal in honor of her son who was killed in Vietnam, but the wing would be a constant reminder to every mother who had lost a beloved child. To many, the wing was “grotesque” and “aggressive”. To Dorothy Blake, one of its most vocal opponents, it was “obscene.”[vi]

In a conciliatory letter to the Veterans Memorial Foundation, Councilman Snyder recognized that the wing idea had “created a sad disunity and division.”[vii] As a compromise, he recommended the erection of a single flag which, while not embraced by all, was not opposed. 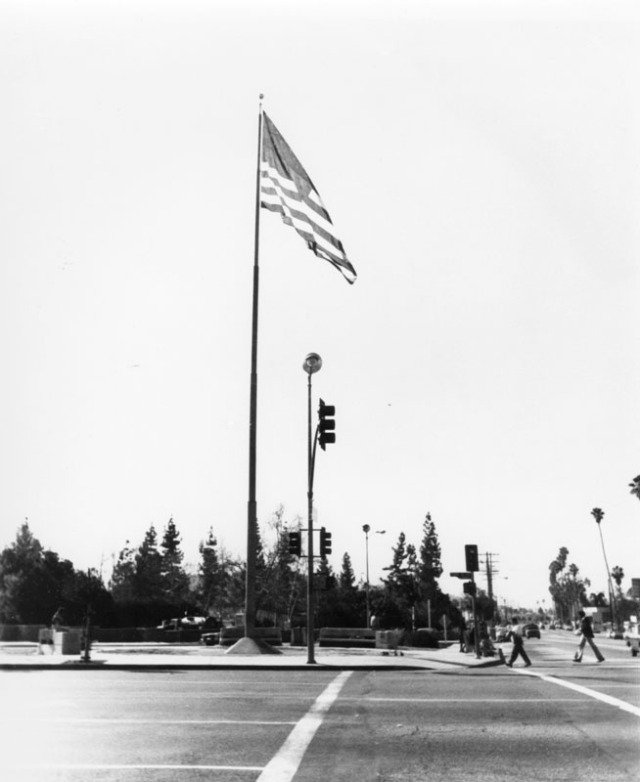 Figure 2: The tallest flagpole with the largest flag in Los Angeles was erected in 1974. Source, Los Angeles Public Library

So it was that the largest American flag, on the tallest flag pole in the city, was dedicated on Memorial Day in 1974. Almost a year later, on March 13,1975, the small traffic island where the flag stood was officially renamed Veterans Memorial Square (figure 2) [viii].

Today, the trees have grown in and softened the stark concrete plan (figure 3 – 7) but the space remains an area of tension. In recent years, it has become a place for the homeless to camp and the base of the flag pole is frequently tagged. These issues and the responses to them mean that, many years after is creation, Veterans Memorial Square remains a symbolically charged political space. It demonstrates that even a little traffic island located on two busy streets can be the receptacle for big ideas, like patriotism and sacrifice and the meaning of peace.